My 8yr old’s been watching a lot of internet videos lately, nearly all about Lego building. I’ve allowed this because he displays the most awesome ingenuity with his Lego building (and also because I’m a bit lazy, I’ll fess up to that). He used his saved pocket money to buy a Superman Lego set last week, and within two days had built it (twice) and then used the bits to create several new spaceships, a hover house, a dragon, and a mining truck with a drill on the front (driven by Lois Lane). Yeah, really. 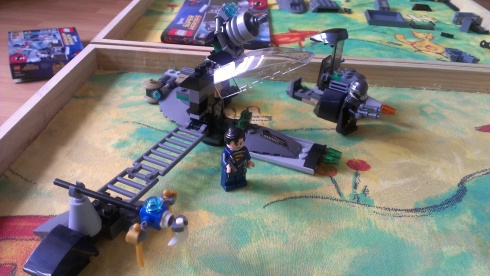 Two spaceships, one with an extendible mining platform. So I’m told.

Non-violent protest. Or: On feeling foolish, and doing it anyway.

You’ve probably heard the news, but if you haven’t, it goes a bit like this: British soldier gets horrifically murdered in Woolwich, by people claiming to be acting “for Islam”. White British fascists fall over themselves to demonstrate how this shows why all Muslims should be kicked out of Britain (or worse). Ordinary people react by telling fascists to ****  off.

Well that’s how it went here, anyway. The EDL (English Defence League, not to be confused with, but hopefully soon to be eclipsed by, English Disco Lovers) decided that for some reason known only to themselves, it would be appropriate to march en masse through the centre of a city approximately 180 miles from Woolwich to lay a wreath for the murdered soldier, who was in no way affiliated with the EDL, at the war memorial. And they honestly expected people would see this as a mark of respect, not as a political gauntlet-throwing. Bless. I’m beyond proud to say that people of my city thronged out and stood in their way, and said no, not here.